Split pea soup is a staple meal of many different countries around the world. Pea soup was enjoyed as far back as 500 BC when the Greeks and Romans first began to cultivate peas. Nowadays, you can find variations of split pea soup recipes from different countries such as Canada, Germany, Poland, and Australia. Today I’ll be sharing a family-friendly copycat recipe of this fantastic soup – it makes a healing Instant Pot split pea soup using a great mix of tasty ingredients, including split peas, smoked ham hocks and a devilishly spicy mix of cumin, cayenne pepper, and turmeric. If you grew up enjoying split pea soup, then I’m 100% certain that you’re going to fall in love with this unbelievably delicious recipe.

You’ve Never Had Split Pea Soup This Good Before

As the title of this recipe would suggest, you’re going to need to use an Instant Pot if you want to make this split pea soup. If you don’t currently own an Instant Pot, then I would definitely recommend going with their 7-in-1 Multi-Use Pressure Cooker model. It’s the same one that I personally use and I have zero complaints about it. It works great for steaming veggies and making soups, rice, and even yogurt. It can even double as a slow cooker if you’re fond of stews. You can buy one online by clicking here. 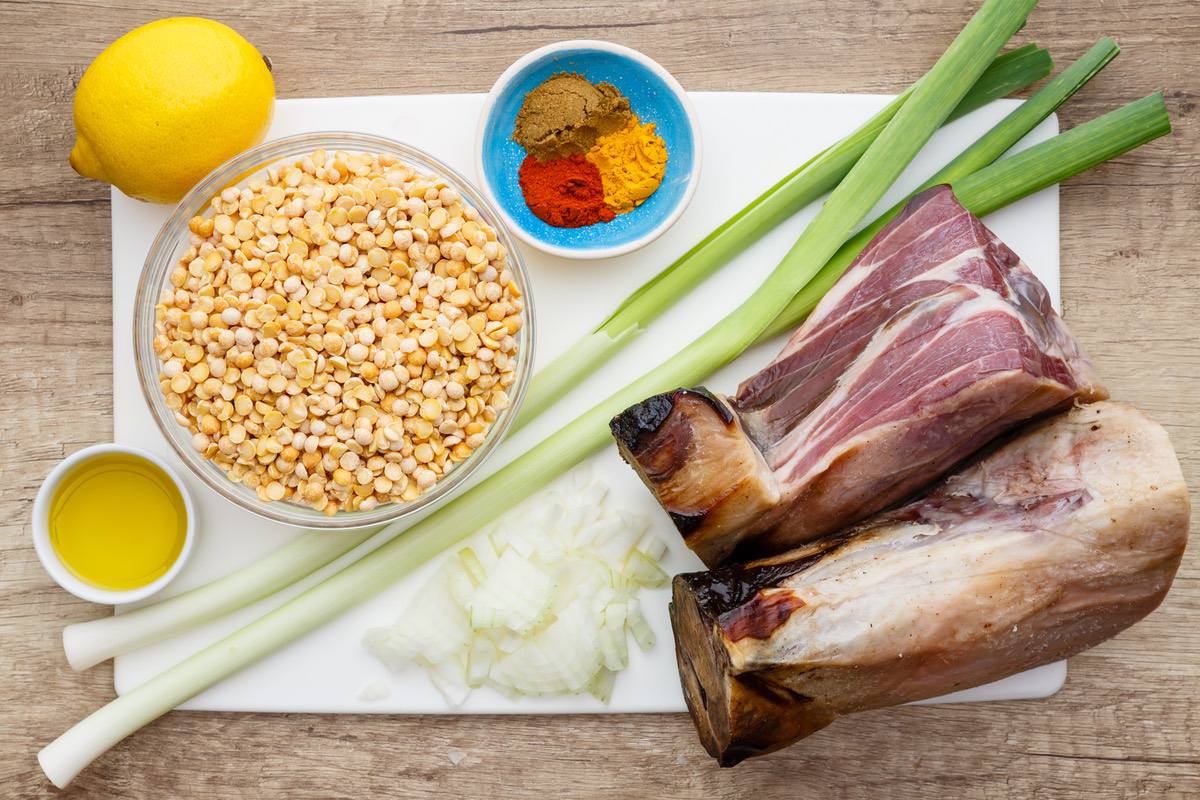 As for making the soup, you’ll want to set your Instant Pot to ‘SAUTE’ until the screen reads ‘HOT’. Add in two tablespoons of extra virgin olive oil and then you can start to cook the chopped onion and leek slices. While we’ve shared many soup recipes that feature onions as a primary ingredient due to how good they are for you, leeks are definitely no slouch when it comes to nutrition. It should come as no surprise considering they belong to the same Allium family as onion, garlic, shallots, and chives. Studies have found that members of the Allium family of vegetables are particularly good foods to eat when it comes to cancer prevention. (1) 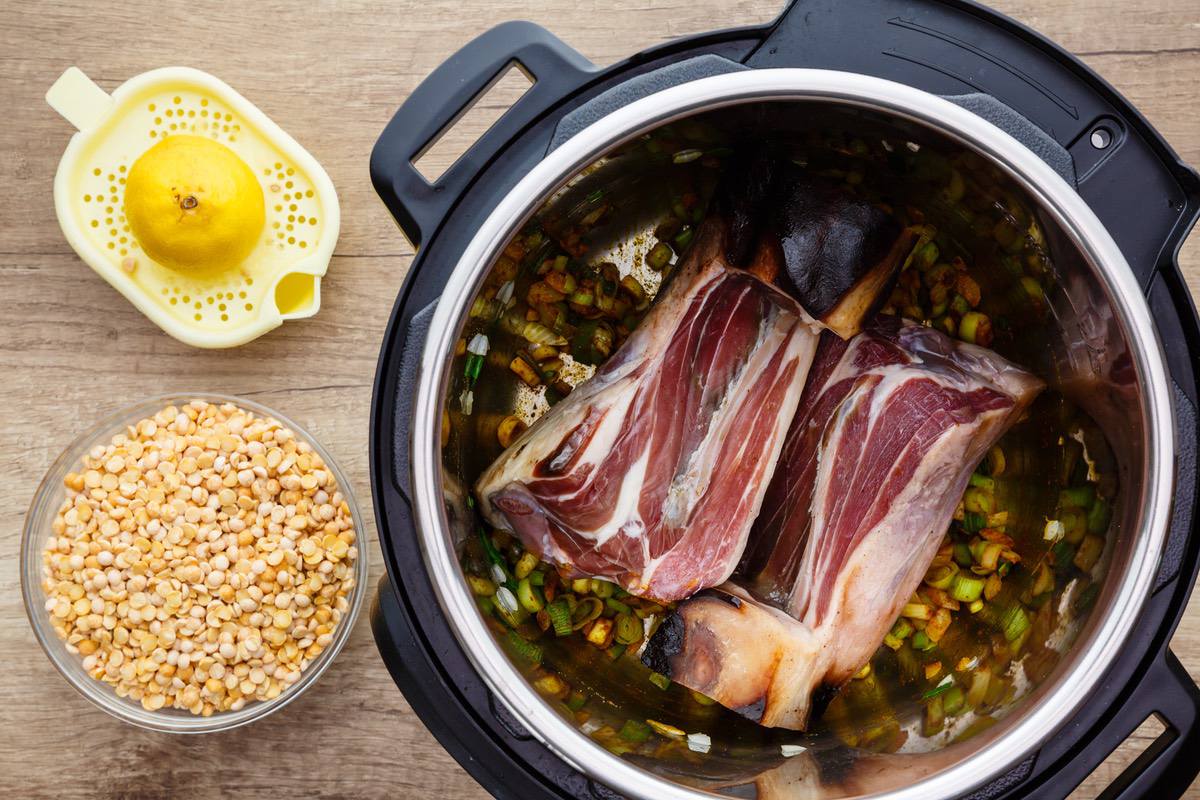 After cooking the onion and leeks for a few minutes, add in the mix of spices – cumin, cayenne pepper, and turmeric. Not only do these three ingredients add a deliciously spicy flavor to your split pea soup, but they’re all incredibly good for your health as well. Large scale studies have actually found that regular consumption of culinary spices and spicy foods may contribute to increased longevity. (2) 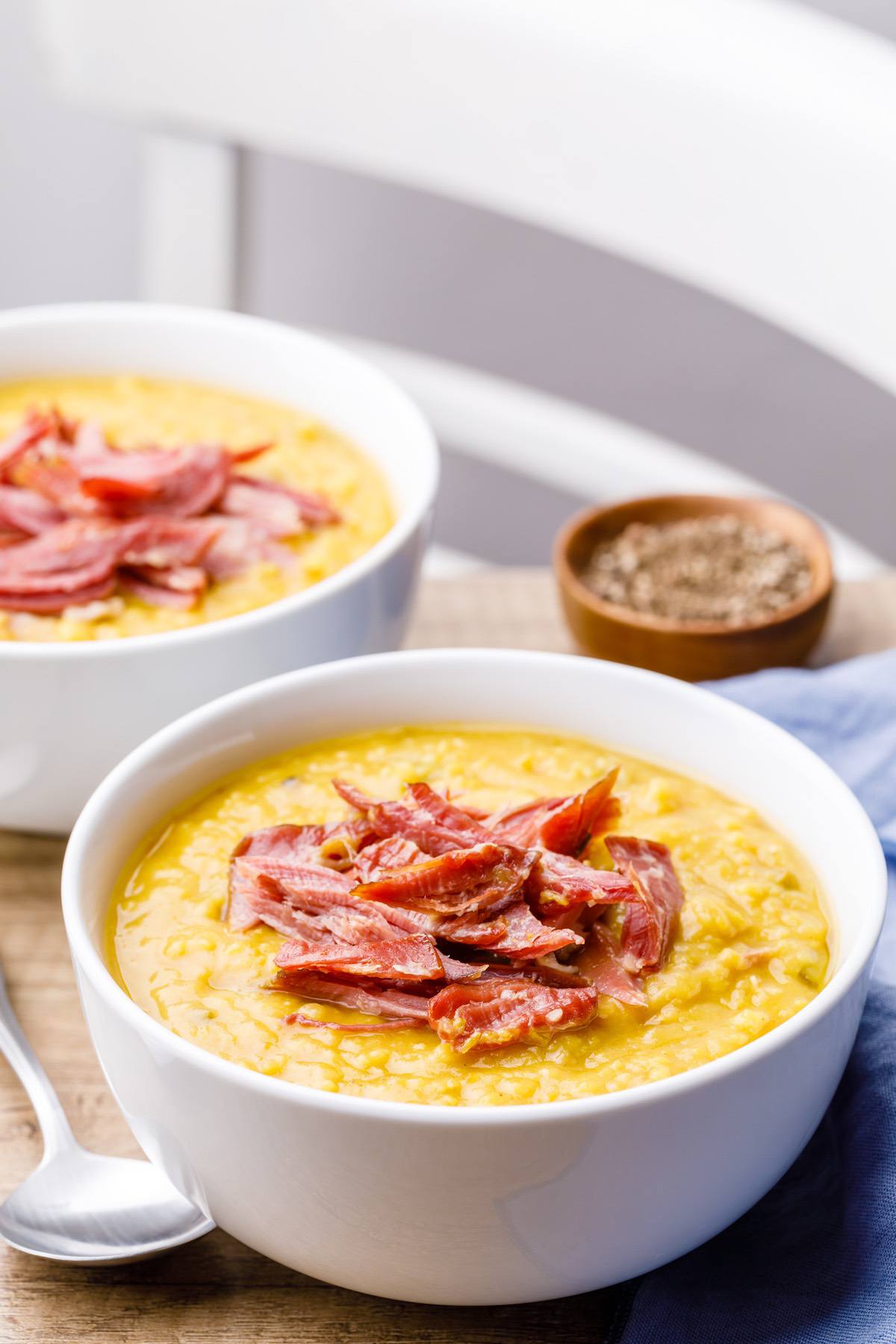 In order to give your soup even more flavor, you’ll also be adding in two smoked ham hocks. Leave them cook for a few minutes and then you can finally add in your dried split peas. One of the reasons why split pea soup is so incredibly satisfying is because peas are such a great source of protein and dietary fiber. Research has even found that vegetable protein sources like peas may be even more satiating than animal protein sources. (3) 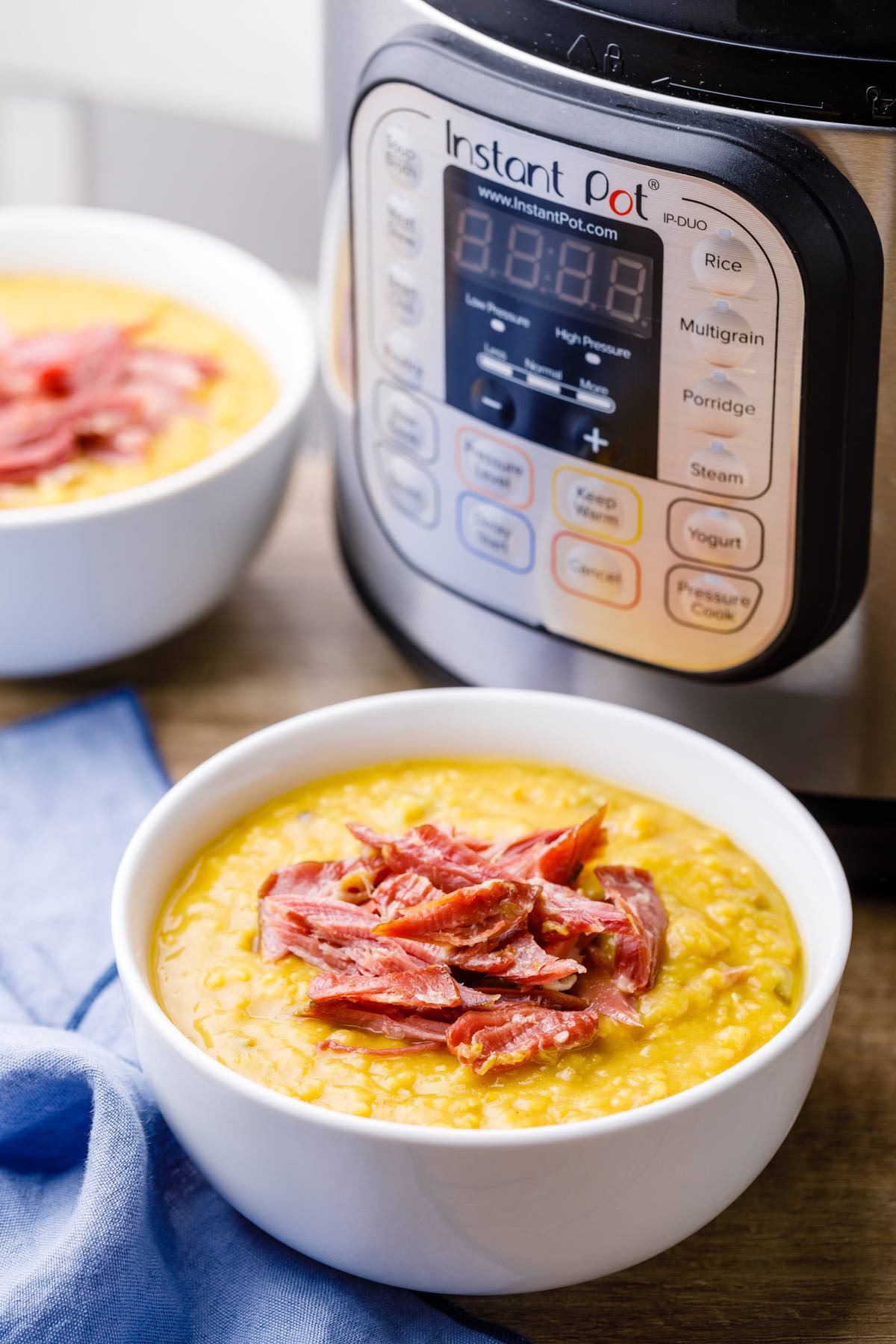 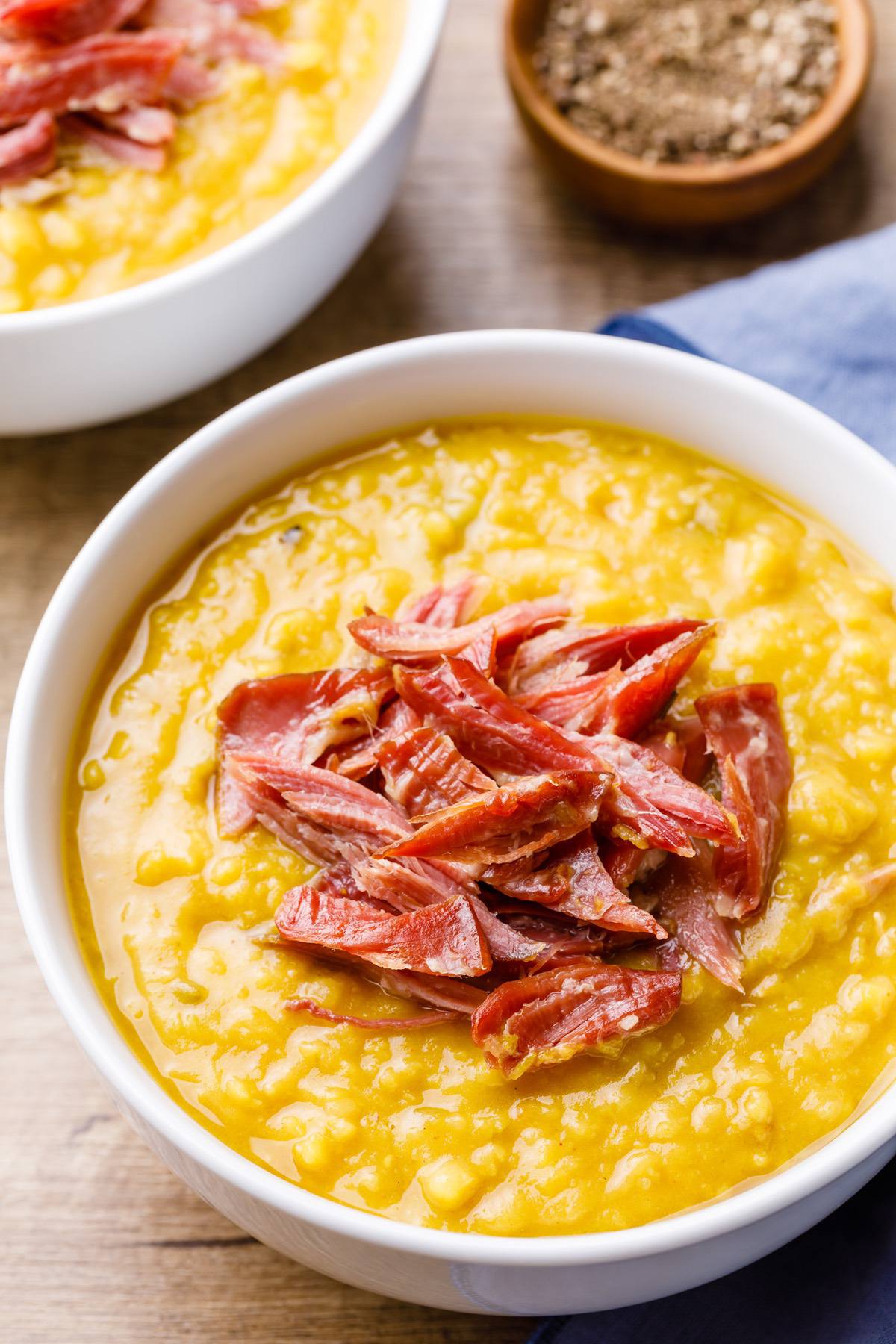 Stir the peas in until they’re coated and then add six cups of water and the lemon juice. Seal up the Instant Pot, set it to ‘PRESSURE COOK’ and adjust the timer for 12 minutes. Once the timer goes off, quick-release the pressure, and remove the ham hocks. Pick the meaty pieces off, cut them into small pieces, then stir them back into the soup. You can also leave a few extra pieces out to use as a garnishment if you’d like. Either way, I’m positive that you’re going to fall in love with this perfectly spicy and oh so satisfying split pea soup – I know I did!

(You may also like: Beef Bone Broth French Onion Soup) 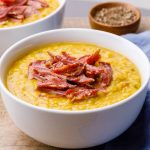