Eggs are considered a primary ingredient in the culinary world because of their unique properties and uses. Eggs help bind ingredients, add volume, emulsify liquids, add flavor, and many more.

They’re especially common in baking where practically every recipe calls for whole eggs, egg whites or egg yolks. There are, however, some people who avoid eggs for one reason or another. Luckily, there are many egg substitutes that you can try that yield pretty much the same results.

Here are 9 great substitutes for eggs. 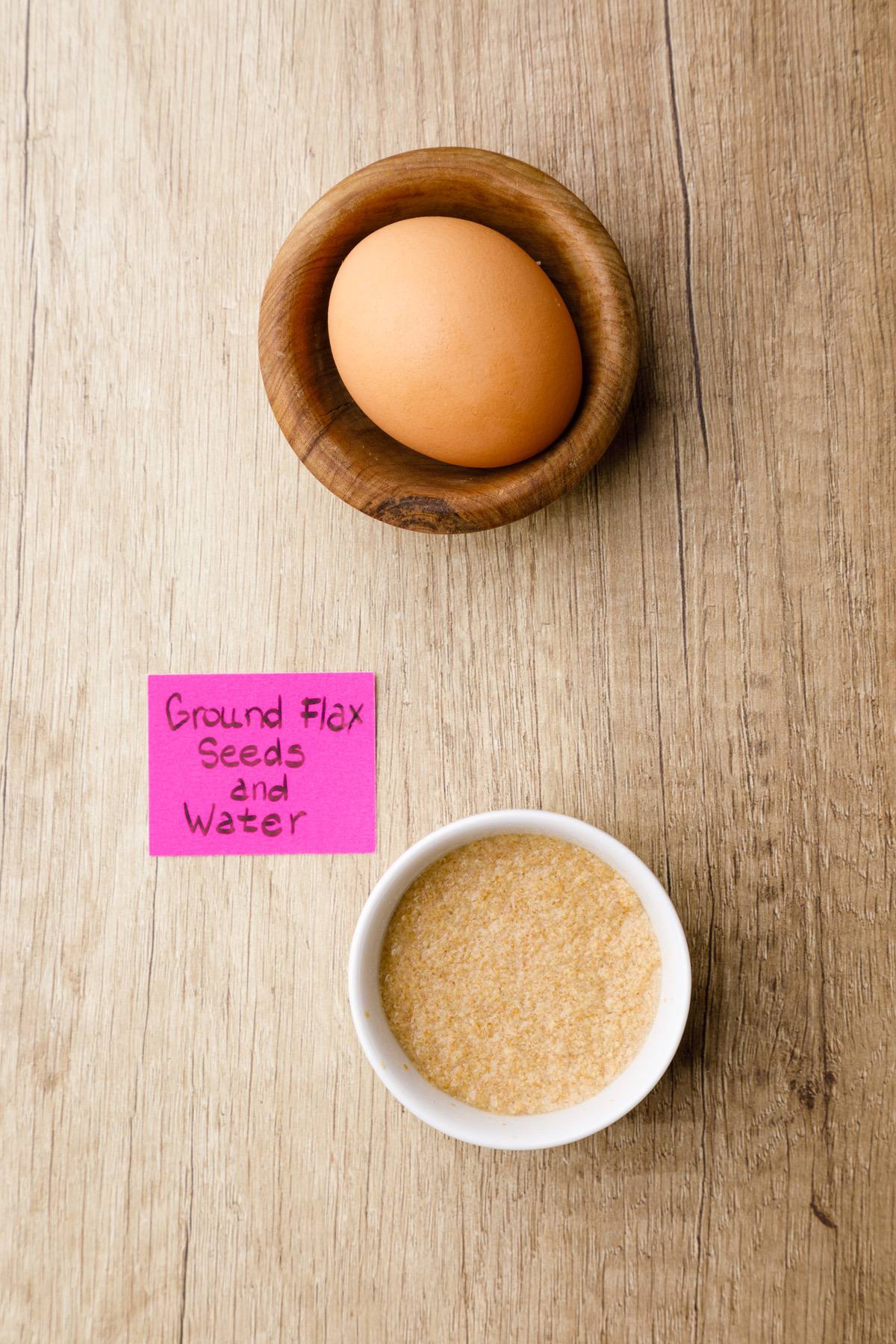 Flax seeds are tiny, highly nutritious seeds that are high in omega-3 fatty acids. They’re a popular addition to smoothies, oatmeal, and baked goods because they don’t change the flavor of your recipe, so it goes with pretty much everything.

Can I Use Ground Flax Seeds and Water Instead of Eggs?

Yes, you can! Flax seeds absorb a lot of water, especially once you give them time to really soak up all the liquid. It thickens into a paste, which can then be added to baked goods.

This egg substitute is best for baking rather than cooking in soups, sauces, and the like.

Flax seeds are high in dietary fiber, omega-3 fatty acids, antioxidants, and protein. It’s considered one of nature’s superfoods since it’s packed full of vitamins, minerals, and. antioxidants despite being so little. Flaxseeds also contain phenolic compounds such as flavonoids, lignans, and phenolic acids which exhibit anti-cancer and antioxidant properties for overall health.

How to Substitute Ground Flaxseeds and Water for Eggs

Simply combine 1 tablespoon of ground flaxseeds with 3 tablespoons of hot water. Mix together and leave to soak for at least 30 minutes or until the water is fully absorbed. The mixture should be thickened into a paste. 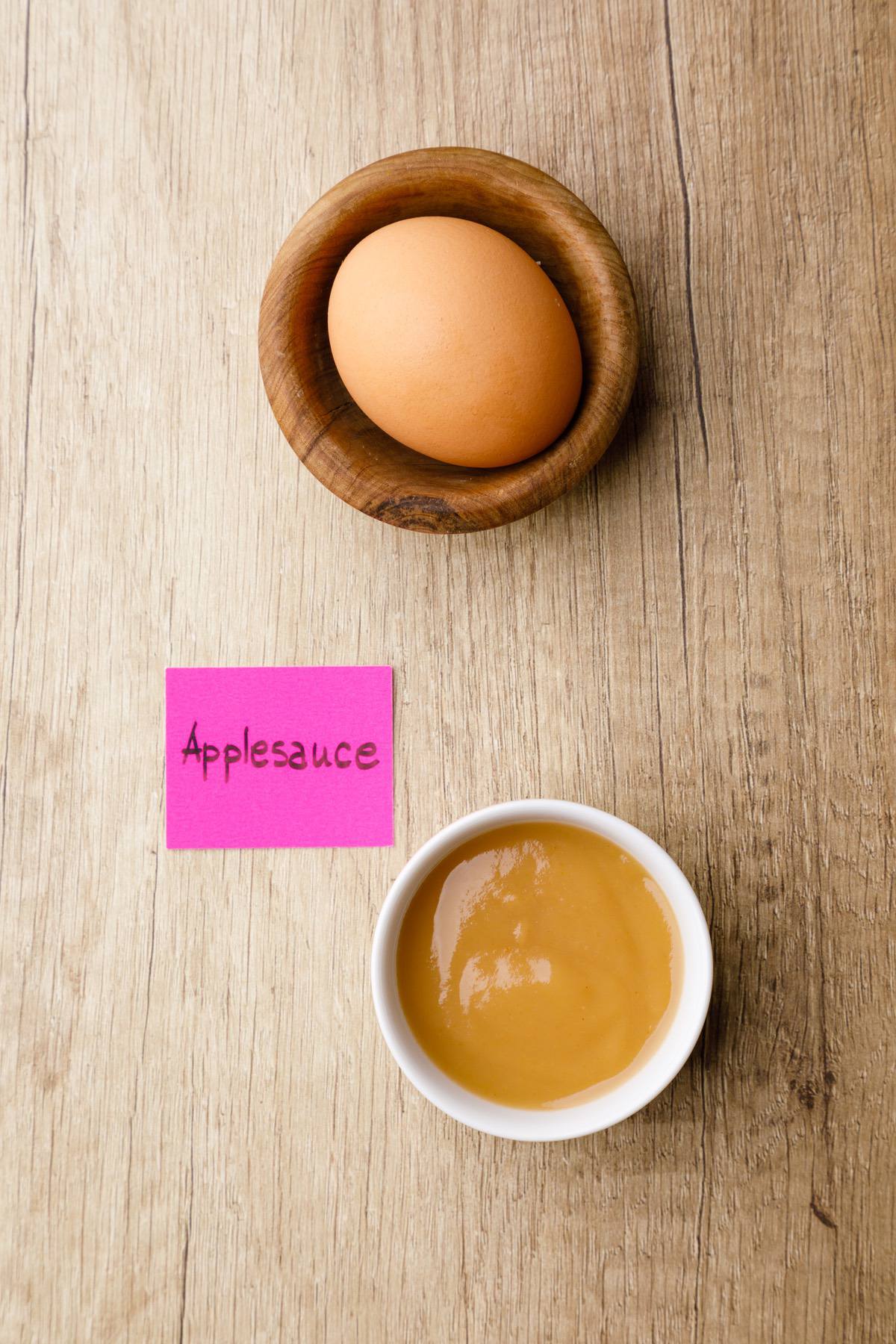 Applesauce is a common egg substitute in recipes that benefit from a bit of sweetness and moisture, so it’s great for baking desserts and other sweet treats. Applesauce is also plant-based and made from pureed cooked apples, making it quite healthy for you too.

Can I Use Applesauce Instead of Eggs?

Yes, you can use applesauce as an egg substitute in a lot of your recipes. As mentioned earlier, it works great for desserts because applesauce is naturally sweet and has a mild apple flavor to it that pairs well with baked goods.

Applesauce is great because it contains pectin, which acts as a binder for dry ingredients. It is not a leavener however, so expect your baked goods to be a little denser and more moist as a result of substituting eggs with applesauce.

Apples are incredibly good for you and regular consumption has been linked to a wide range of health benefits such as lower risk of developing certain cancers, lower LDL cholesterol levels, and higher antioxidant activity to help protect against free radical damage and oxidative stress. Apples contain a variety of phytochemicals such as quercetin, chlorogenic acid, phloridzin, and catechin.

How to Substitute Applesauce for Eggs

Be sure to use unsweetened applesauce for this, as the pureed apples already contain the pectin and sugars needed for it to act as an egg substitute. 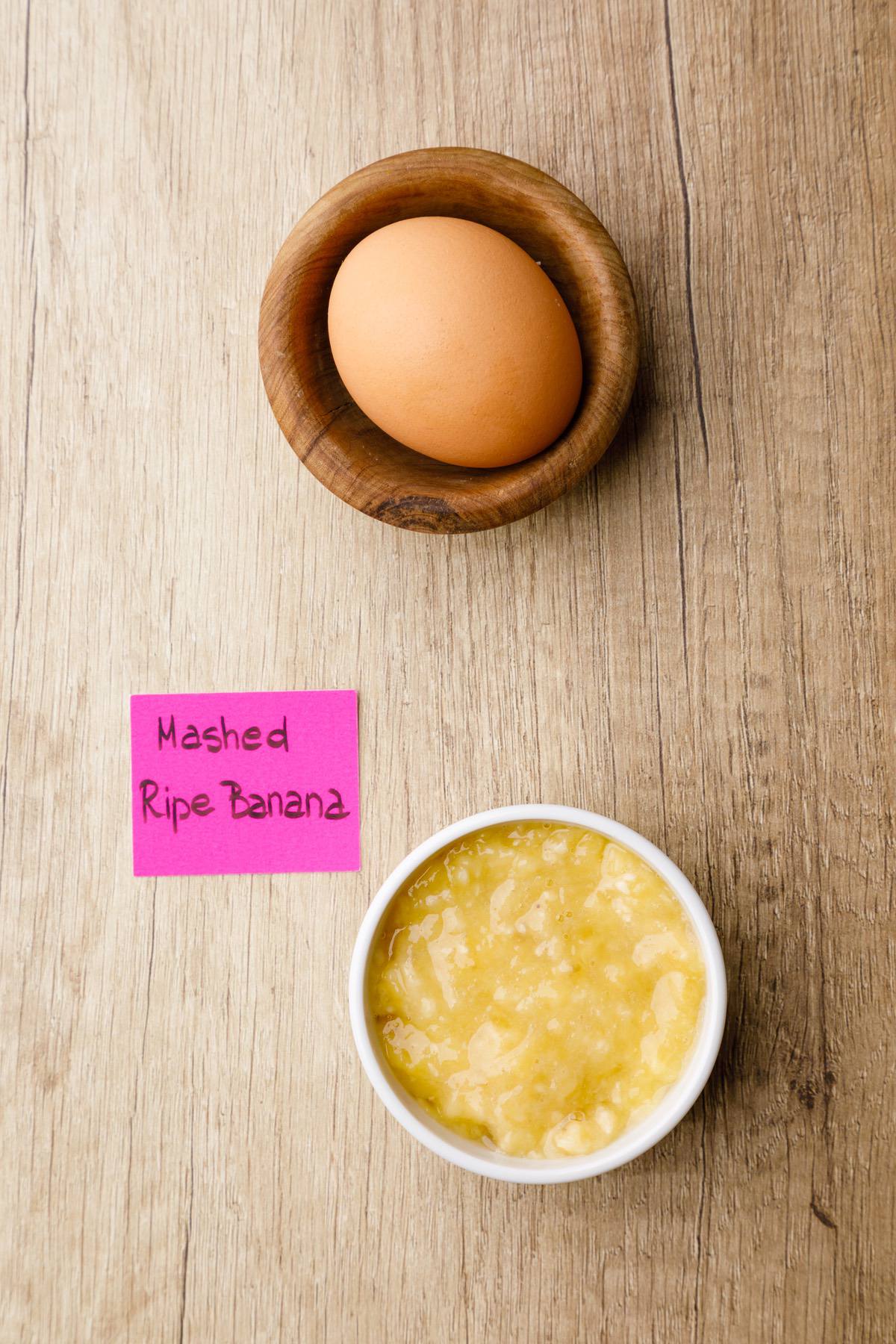 Similar to applesauce, mashed ripe banana can stand in as an egg substitute in recipes that require a lot of moisture from eggs. The natural sugars in the ripe banana also help add to the sweetness level of your baked goods.

Can I Use Mashed Ripe Banana Instead of Eggs?

Yes, definitely! Mashed ripe banana is so easy to make and prepare, it’s literally done in 10 seconds. It adds moisture to baked goods and also serves as a binder for dry ingredients.

It’s important to note that unlike eggs, mashed ripe banana does not contain any fat, so it will have to be compensated for by adding just a bit more oil or butter to the recipe. Also, the banana has to be adequately ripe, otherwise it won’t yield the same results. 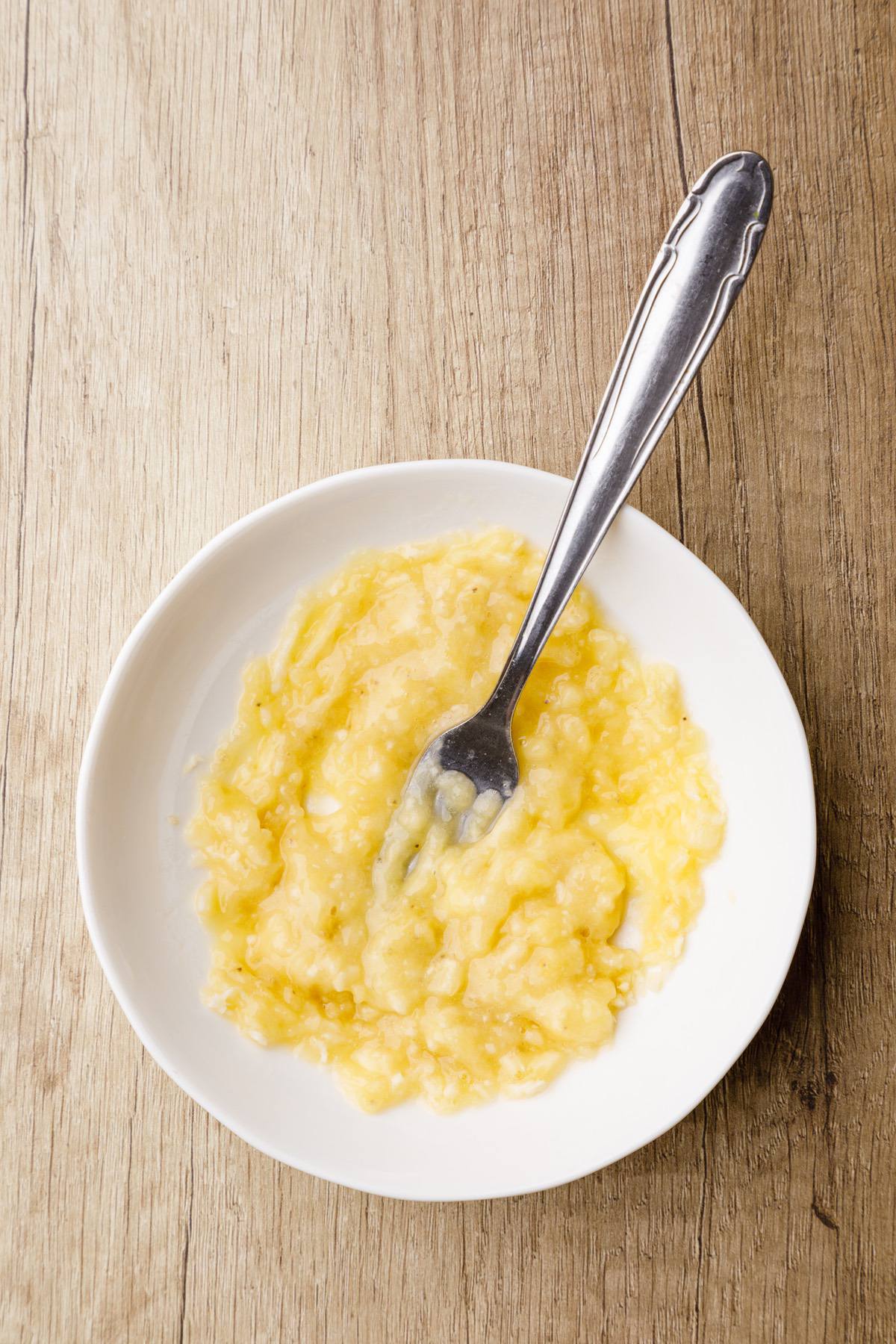 How to Substitute Mashed Ripe Banana for Eggs

Substitute eggs for ¼ cup of mashed ripe banana. If your recipe calls for 1 whole egg, you can simply substitute it with ¼ cup of ripe mashed banana. 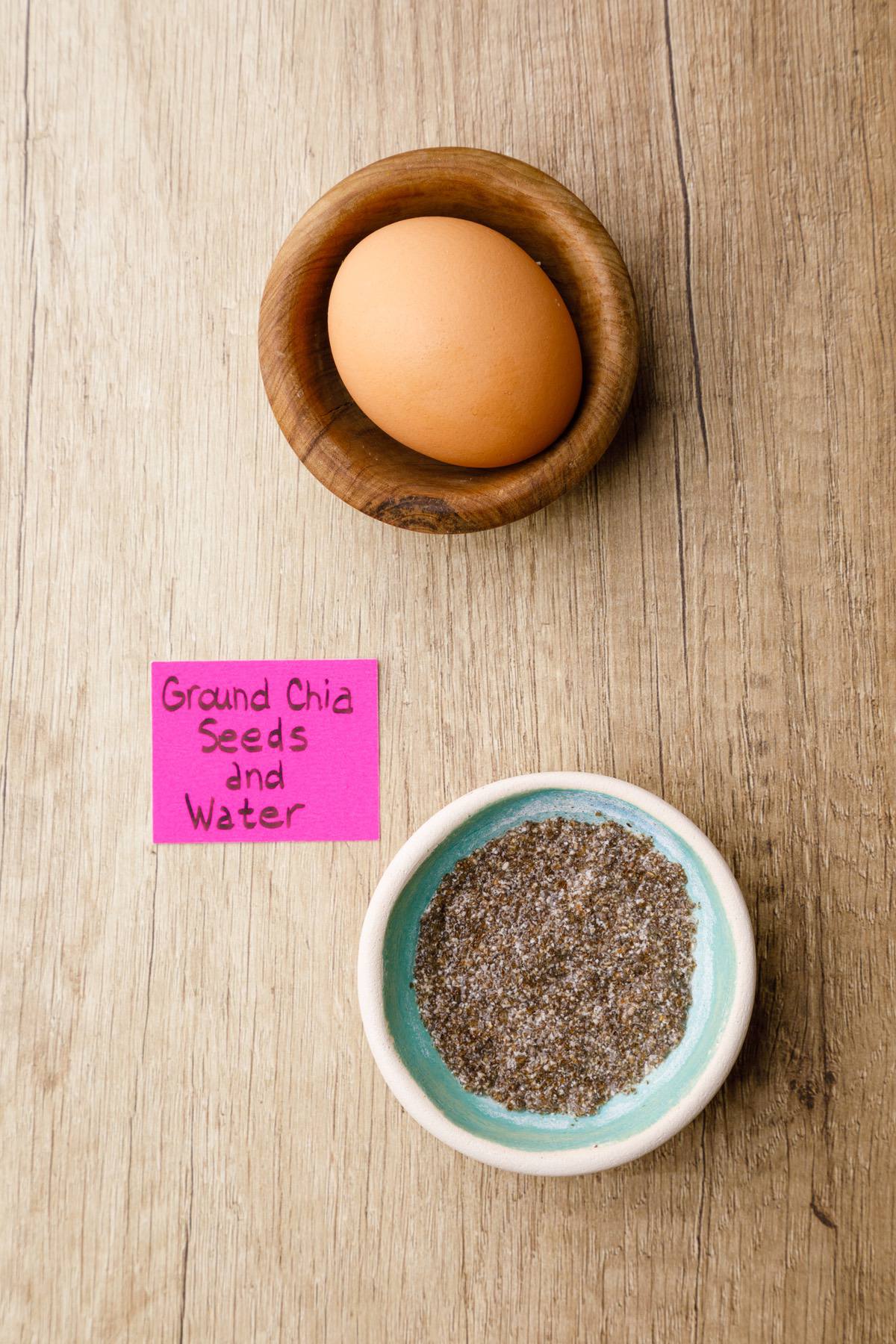 Can I Use Ground Chia Seeds and Water Instead of Eggs?

Definitely! In fact, in vegan baking and cooking, ground chia seeds and water is a popular egg substitute that works remarkably well. Chia seeds are incredibly versatile and can be added to everything from pancakes to different types of bread.

What’s great about chia seeds is that it’s actually good for you and comes packed with nutrients. It’s high in omega-3 fatty acids, minerals, and protein for overall health and wellness. Chia seeds are also an excellent source of dietary fiber, which offers numerous health benefits such as regulating bowel movements, lowering your risk of developing certain types of cancers, improving your gut microbiome,and more. 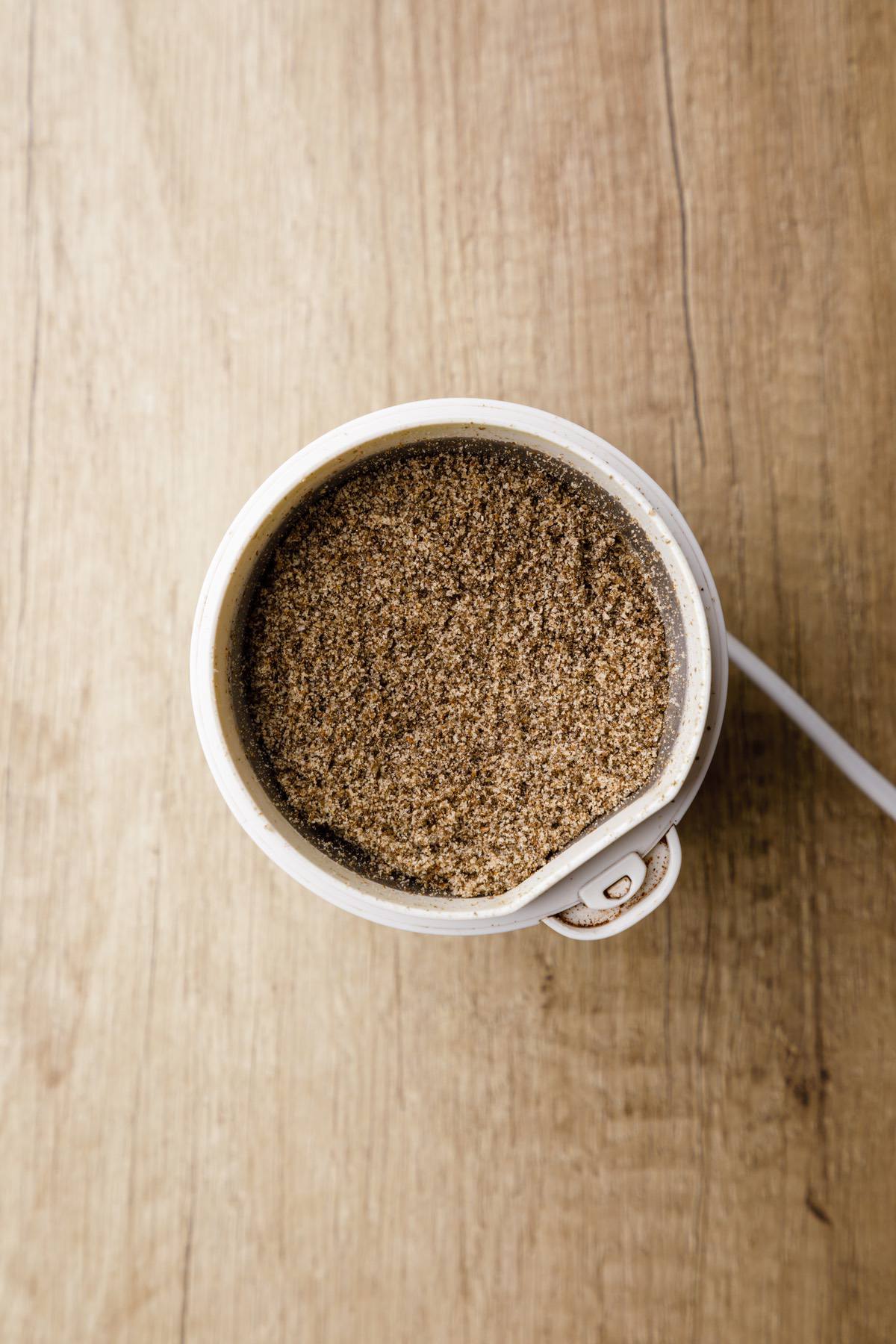 How to Substitute Ground Chia Seeds and Water for Eggs

Don’t worry because it’s extremely easy to grind up some chia seeds using a food processor. The finished product should be a semi-fine powder.

Once you have the ground up chia seeds, simply combine 1 tablespoon of ground chia seeds with 2 tablespoons of water. Mix together and leave to soak for at least 2 hours or until the water is fully absorbed. The mixture will thicken and form into a gel-like consistency. 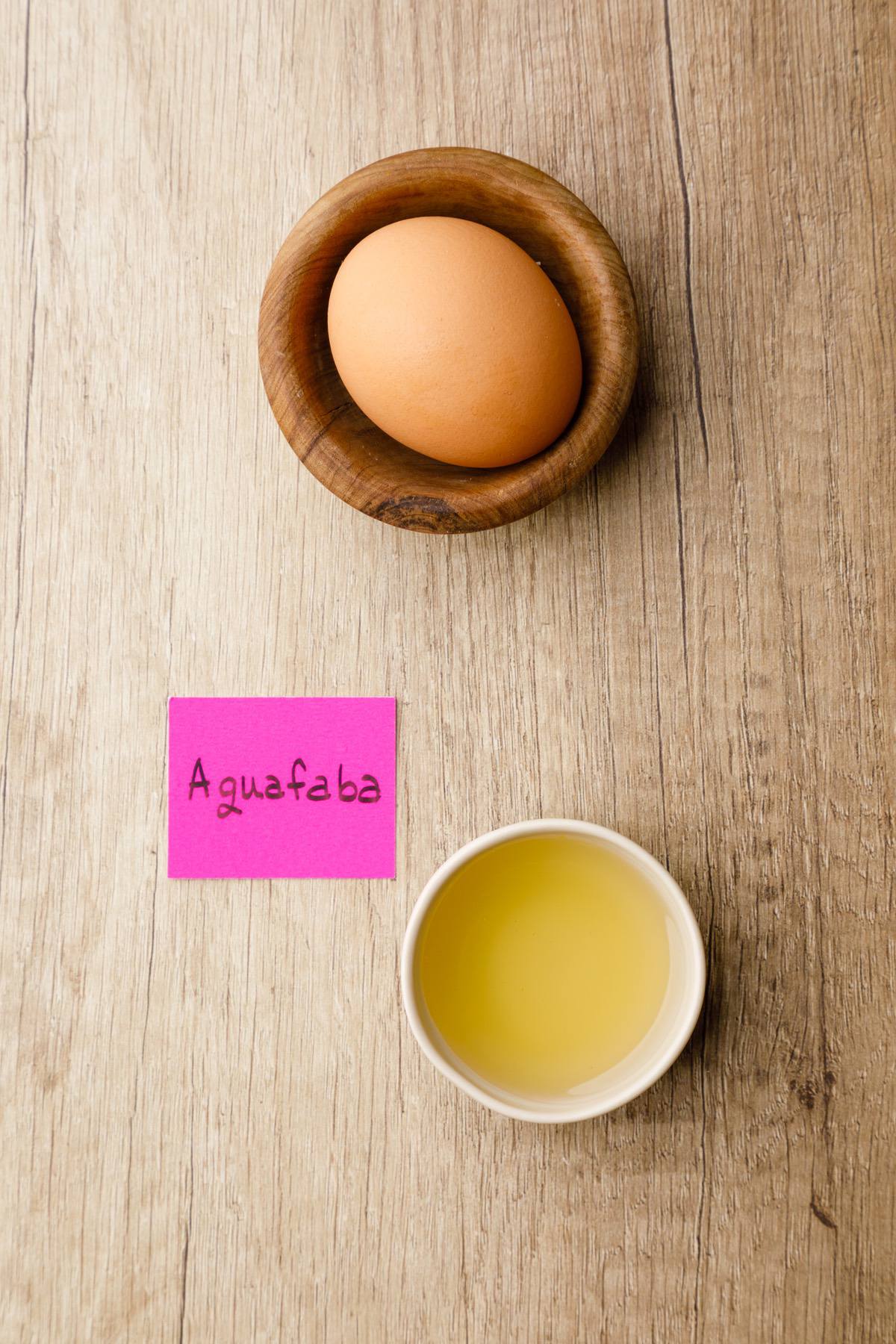 Aquafaba is the drained liquid left over from drained chickpeas. You can obtain this liquid from canned chickpeas or you can also make your own by boiling raw chickpeas and storing the leftover liquid. It is then whipped until it reaches the desired thickness or consistency.

Can I Use Aquafaba Instead of Eggs?

Absolutely! Aquafaba isn’t as commonly used as chia seeds and flax seeds as an egg substitute, but it actually works really well especially if you’re looking for a more versatile option in terms of texture. It has the potential to be an inexpensive gluten-free, vegan additive in many recipes such as sponge cake, mayonnaise, meringue, mousse, and whipped cream.

Aquafaba is made with the liquid from canned or cooked chickpeas, so some of the nutrients found in chickpeas are transferred to the leftover water. It typically contains polysaccharides, protein, vitamins, and minerals. 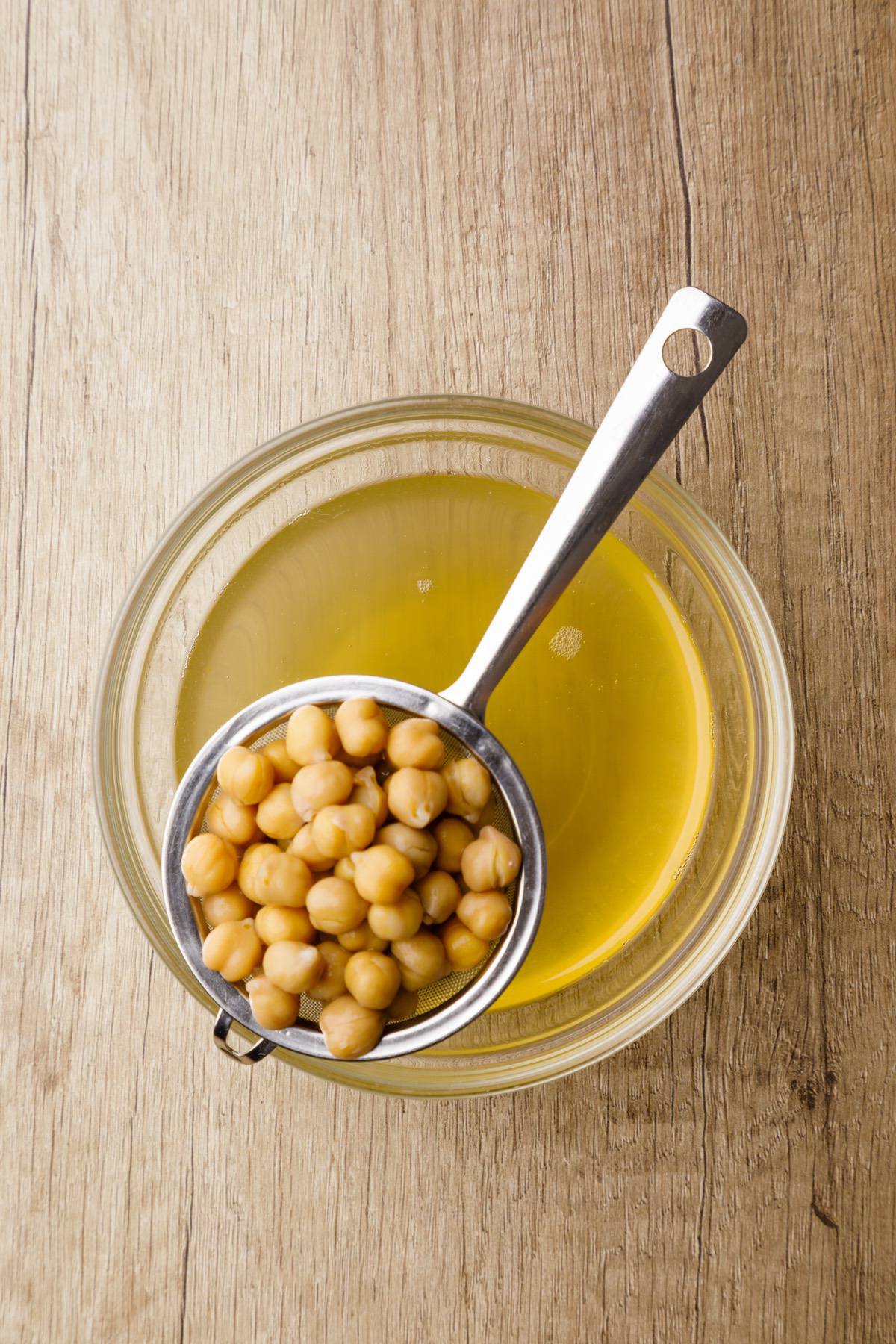 How to Substitute Aquafaba for Eggs

Drain and set aside the liquid from canned chickpeas. A standard can of chickpeas is about 15 ounces with the liquid included. Once you’ve separated the chickpeas from the liquid, use a hand or stand mixer to whip the liquid until it forms a consistency similar to whisked egg whites.

If the recipe calls for whipped egg whites, simply continue whipping the liquid until it forms into stiff peaks. 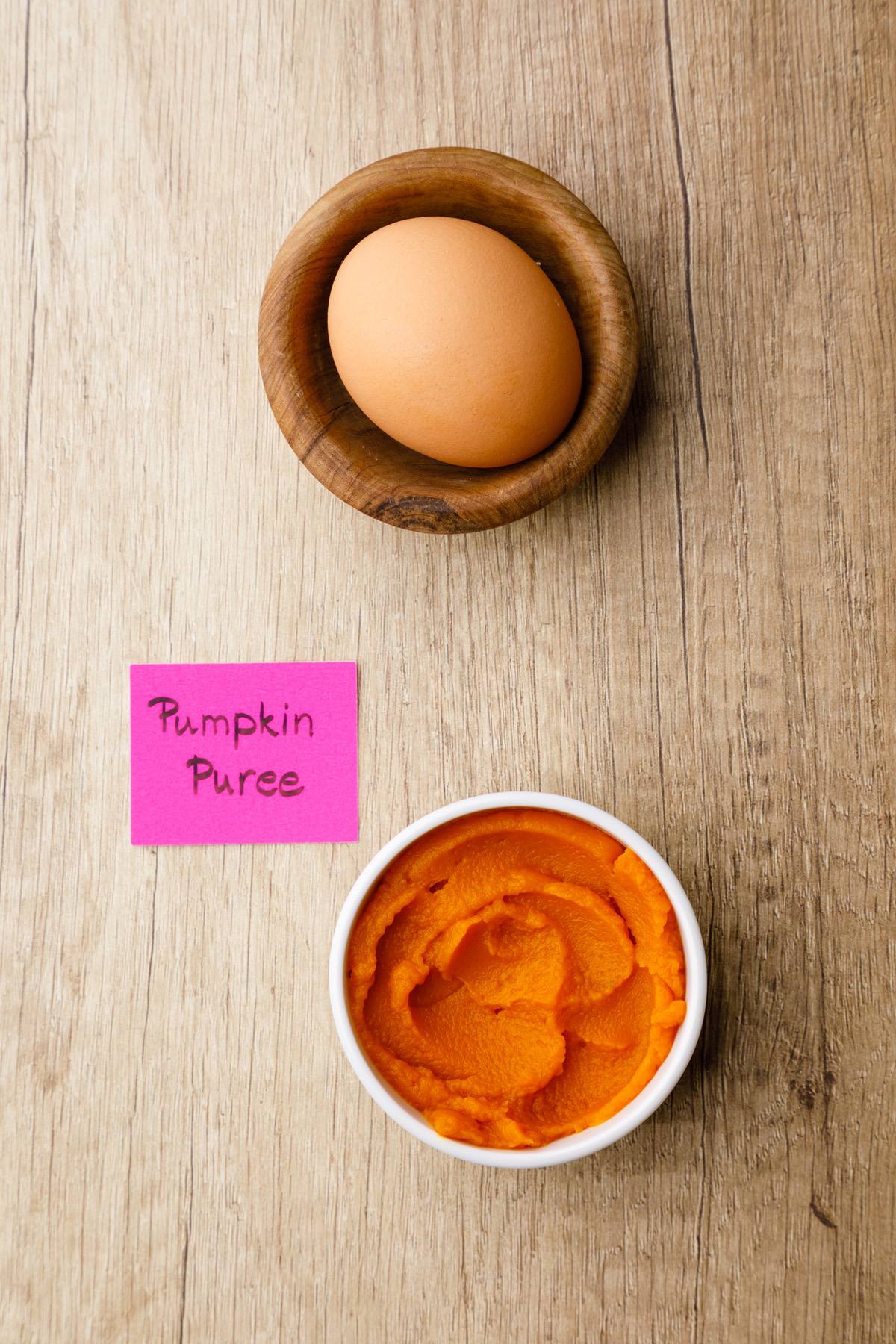 Pumpkin puree is often thought of as a seasonal ingredient, but it’s actually used all-year-round as a vegan-friendly egg substitute. Its mild flavor is fantastic for all sorts of recipes, so you don’t have to worry about how it will change the actual finished product.

Can I Use Pumpkin Puree Instead of Eggs?

Pumpkin is a good source of pectin, vitamins, minerals, and carotene, which have been shown to have positive effects on various health outcomes such as reducing risk of certain types of cancers, reduced risk of diabetes, better metabolic health, and reduced intestinal inflammation.

How to Substitute Pumpkin Puree for Eggs

If your recipe calls for 1 egg, you can simply substitute it with ¼ cup of pumpkin puree. Pumpkin puree can be quite thick, so if your batter is affected, simply add a tablespoon or two of water to dilute the mixture. 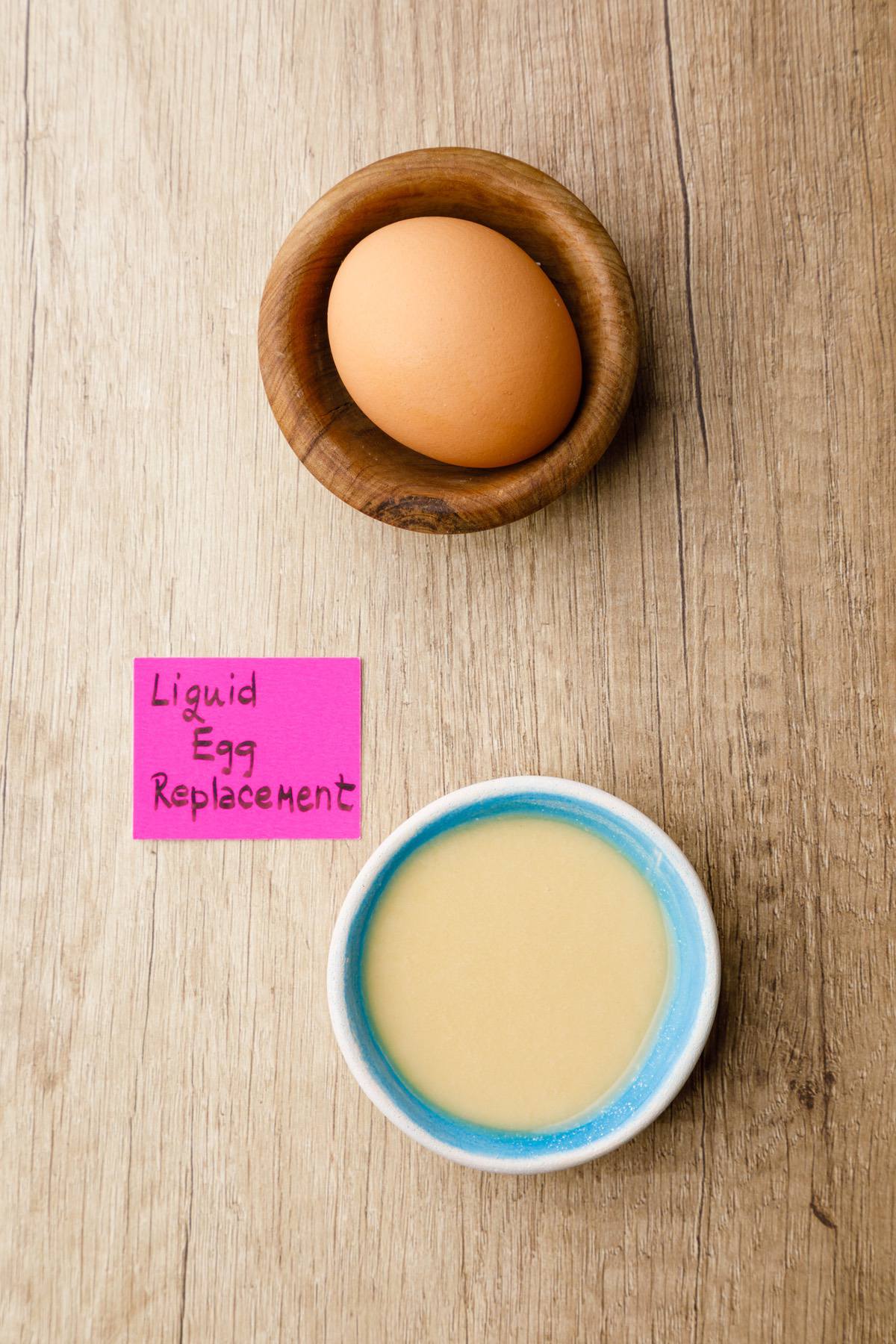 You can find liquid egg replacements in some supermarkets and specialty stores if you’re looking for an egg substitute that looks almost just like real eggs. Some people choose this option simply so the finished product looks no different than if they were to use real eggs.

Can I Use Liquid Egg Replacement Instead of Eggs?

You certainly can. We eat with our eyes first, so if you were to make an omelette or frittata where the main ingredient is eggs, you’re going to want the most visually similar option available and that happens to be liquid egg replacement.

Liquid egg replacement looks a lot like beaten eggs because some of them really do contain eggs. In some cases, they contain egg whites only as compared to the whole egg. If you have an egg allergy, go for liquid egg replacements that are tagged as vegan because those are the real egg substitutes and contain no eggs whatsoever.

Liquid egg replacements may be your only option if you truly have an egg allergy, particularly with recipes like omelettes, scrambled eggs, quiches, or frittatas. You simply can’t replace eggs with flax seeds and expect it to turn out like scrambled eggs. With that said, liquid egg replacements are generally not the healthiest foods around and often contain a wide variety of ingredients just to make it look, feel and taste like the real thing.

How to Substitute Liquid Egg Replacement for Eggs 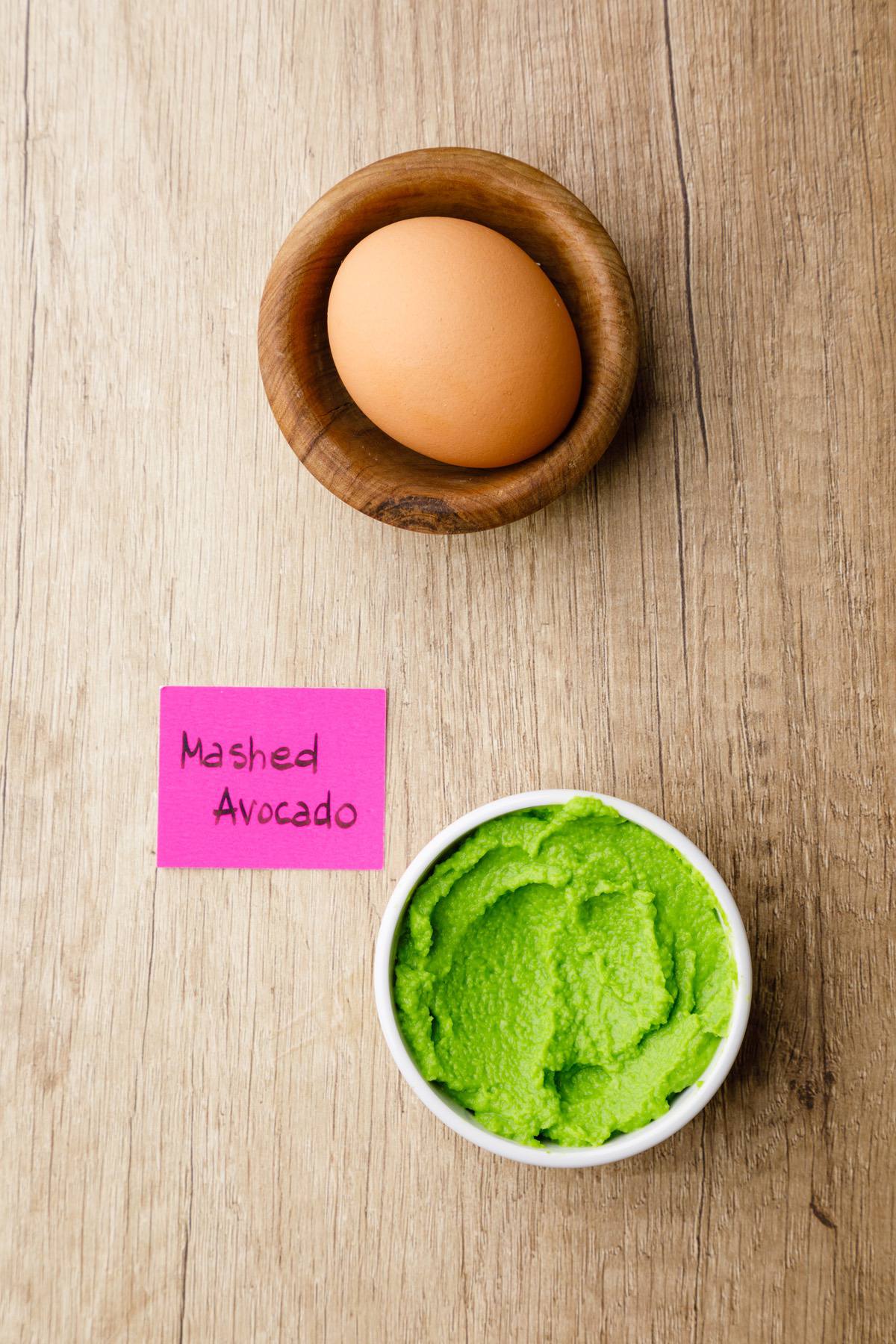 Mashed avocado isn’t just for spreading on toast. You can also use it as an egg substitute in many baked recipes such as breads and muffins. It works great for adding moisture, as a binder, or simply as a natural colorant.

Can I Use Mashed Avocado Instead of Eggs?

Yes, you can. Mashed avocado is similar to mashed ripe banana, except it has a higher fat content which is something you should consider when using it as an egg substitute in your recipe. It is thicker and richer, not to mention it has a bright green color which can affect the overall look of your recipe. A higher fat content will result in a thicker and creamier finished product, which is why mashed avocado is typically used in baking rather than cooking.

Avocado is a staple health food for a reason and that’s because it offers such a wide range of health benefits. For one, it’s an excellent source of healthy fats which protect the body against cardiovascular diseases, high blood pressure, high cholesterol levels, and risk of stroke. It also contains a good amount of fiber for digestive health and bowel regulation. 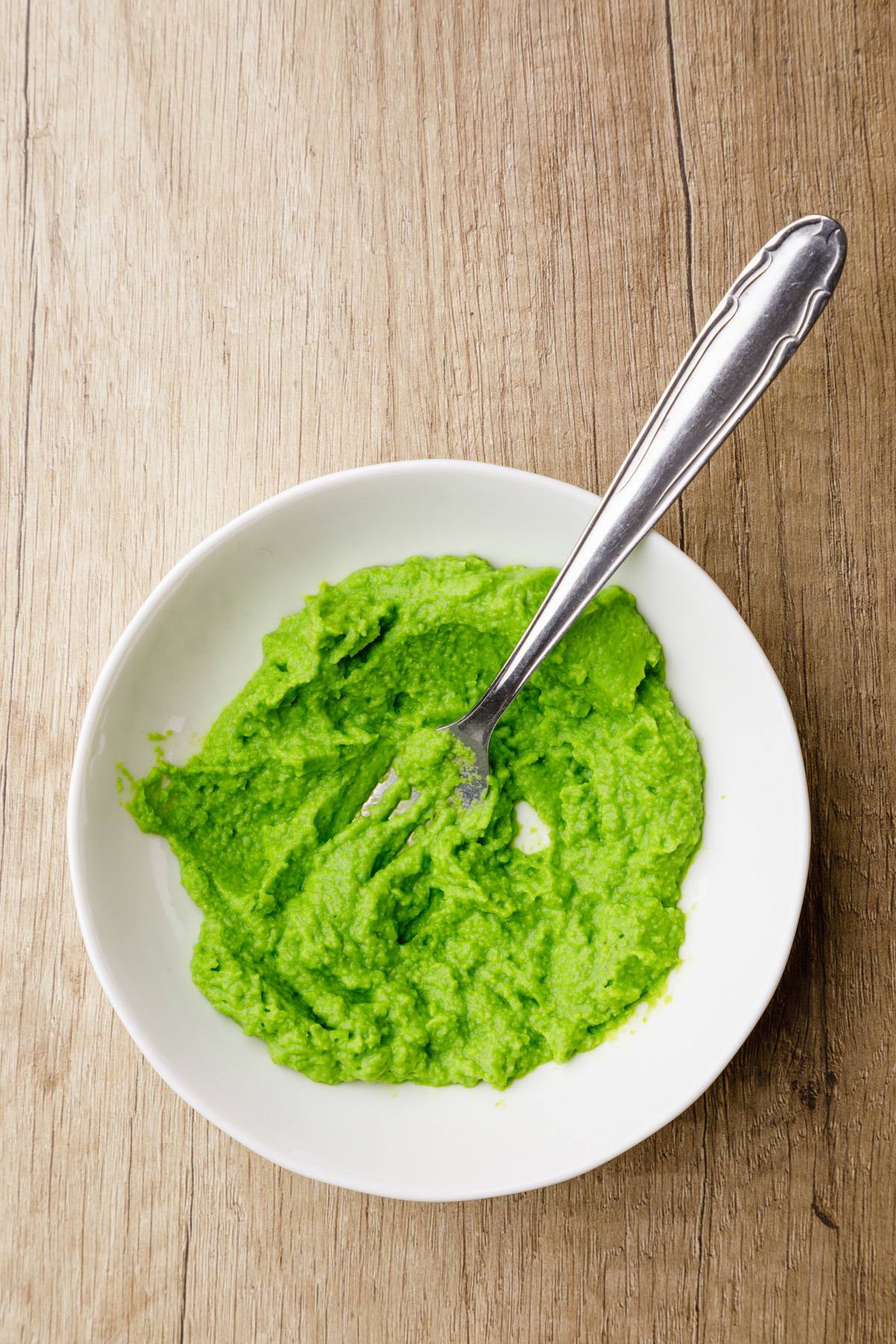 How to Substitute Mashed Avocado for Eggs

Mash up one half of an avocado until it looks similar to a puree. Use a fork or potato masher for this rather than a food processor because a food processor will liquefy the avocado and turn it into a soup.

Substitute 1 whole egg for ¼ cup of mashed avocado. Since mashed avocado is already high in fat, you can slightly reduce the other fats and oils in your recipe.

Plain Greek yogurt is a popular egg substitute because it’s readily available and it certainly gets the job done. It can be high in fat and protein just like eggs, which makes it a good substitute in many recipes thanks to its chemical composition.

Can I Use Plain Greek Yogurt Instead of Eggs?

Yes, definitely. Plain Greek yogurt is an excellent binder and can certainly work for both savory and sweet recipes. It’s also edible straight out of the package, so you don’t have to worry about undercooking it.

Yogurt is one of the most popular probiotic foods available today. It contains strains of good bacteria that can enhance gut microbiota for a healthy gut and improved digestion, and it’s associated with many positive health outcomes.

How to Substitute Plain Greek Yogurt for Eggs 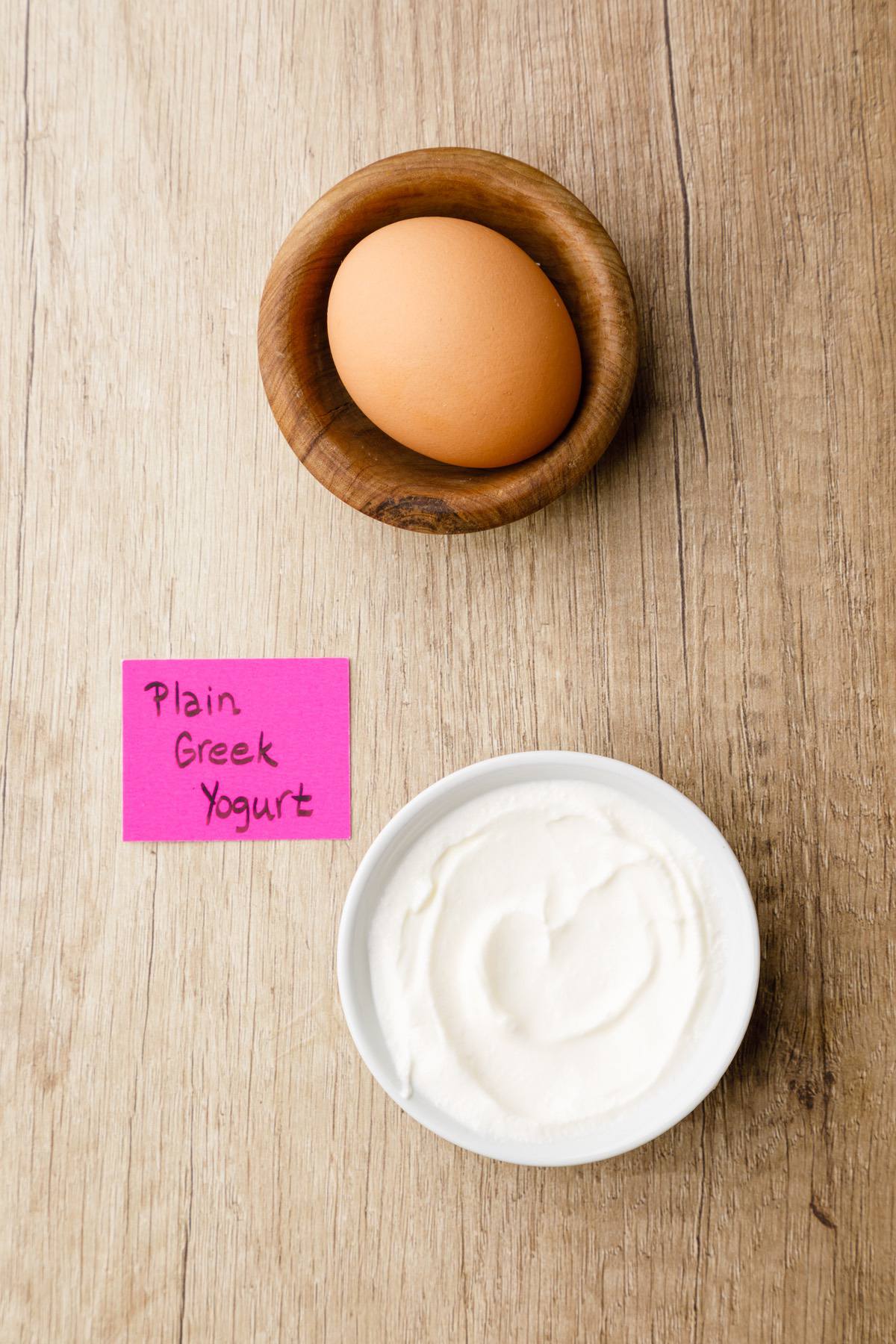